For the last five years, questions about the origins of the Murfreesboro Confederate Monument have come my way. I thought that perhaps a post focusing on the primary sources from the years of its creation could be useful to many people.

The push for the monument began in the 1890s with the creation of the segregated white Evergreen Cemetery (at North Highland Ave) and the removal and reburial at the cemetery of an estimated 2,000 Confederate soldiers from the Ladies Memorial Association cemetery that stood south of the square on the shelbyville pike (now S. Church Street). An article from the first volume of the Confederate Veteran in 1893 announced that the Ladies Memorial Association thought that a proper monument was needed, as related in the story below

The following year, 1894, the editor of the Confederate Veteran praised the Murfreesboro effort.

The newly formed local chapter of the United Daughters of the Confederacy would take over the fundraising. By 1899 enough was in place to build a huge limestone base for the eventual monument. At the dedication of the stone base in the summer of 1899, Jesse W. Sparks, the commander of the Tennessee Division of the United Sons of Confederate Veterans, was the major orator.

The intention of the monument was crystal clear to Sparks: “It is the purpose of sympathizers with the Southern cause to here erect a monument to Confederate heroes as lasting as brass.” His closing words were just as direct. The monument should be “the most precious of our possessions,” because “from the monuments erected throughout our Southland we gather a harvest for the soul, the inspiring food of patriotism.”

And by patriotism, Jesse Sparks was speaking of loyalty to the Confederacy, a point made obvious by the elaborate ceremony dedicating the completed monument in November 1901. As the Nashville Banner reported the evening of the event: “Johnnie Rebs Take The Town.”

There are three primary source accounts of the monument dedication from Nashville publications: the newspapers Banner and Tennessean and the magazine Confederate Veteran. The Banner published the first story and largely summarized the day’s events. It noted that Murfreesboro was “in full holiday attire, and the business houses of the entire city and a number of residences are gaily decorated in bunting. At different points on the Square and on principal streets battle-scarred flags are fanned by the breezes.”

The Tennessean on Friday morning gave a full account of the day in a long story credited to Wm Moffitt, Jr. The reporter noted the many public officials in attendance including Governor Benton McMillan. His observation that “all of the comrades stood upon an equal footing; they were all comrades in the strongest sense of the word engaged in a love feast” with the Confederacy is fascinating.

Moffitt quoted at length the featured address by Col. Bennett H. Young of Kentucky who had served in the command of Gen. John Hunt Morgan. Why a Kentuckian, when the Governor of Tennessee, Benton McMillan, attended? Remember Morgan had married Mattie Ready in Murfreesboro in 1862. There was an obvious local connection and Young was a noted orator. He did not disappoint the estimated 3000 in attendance.

Young’s words were a constant salute to one thing and one thing only—the Confederate cause. As the reporter wrote:,”his frequent reference to the hallowed dead aroused the old-time enthusiasm of the Southern people gathered around him.” Young concluded that “Words are powerless to depict or paint the glory which lingers around the memories of the Confederate dead….they shrank at no sacrifice that patriotism exacted, and they denied their country no service its needs demanded.” And by country Young referred only to the Confederacy, not the United States of America.

The third Nashville account was the summary story in the Confederate Veteran, which the editor called the “proudest day” in the “old city”’s history. The Knoxville Journal and Tribune also reported on the Confederate celebration.

All of these accounts emphasize that the monument was to honor the Confederate dead and the Confederacy. The monument was not about the Civil War— the speakers and sponsors never acknowledged the veterans of the U.S. Army who also lived in Murfreesboro: those who had gone to that same town square in 1863-64 and joined the U.S. Colored Troops.

The monument first stood directly in front of the courthouse. With the automobile age and increased traffic it was later moved to its present location for reasons of public safety. And it continued its role as a memorial, as Jesse Sparks said in 1899, “to Confederate heroes as lasting as brass.”

When North Carolina Revolutionary War veteran Thomas Amis had his stone house built overlooking a creek in 1781-1782, he created a permanent crossroads in the history of the southeast and one of the first homes in wha the would become the State of Tennessee.

We are working with the family, who have maintained this place over two centuries, to study this place and the remarkable people who shaped its history. There’s more to come!

Along an old dirt road a few miles west of Clarksburg is Palestine Church and Cemetery. The well-worn road, and the date of early cemetery markers, tell you here is a place dating to the first generation of white settlement, c. 1830-1840. The present church building probably dates to 1890s. I hope to start research in the spring to find out more. 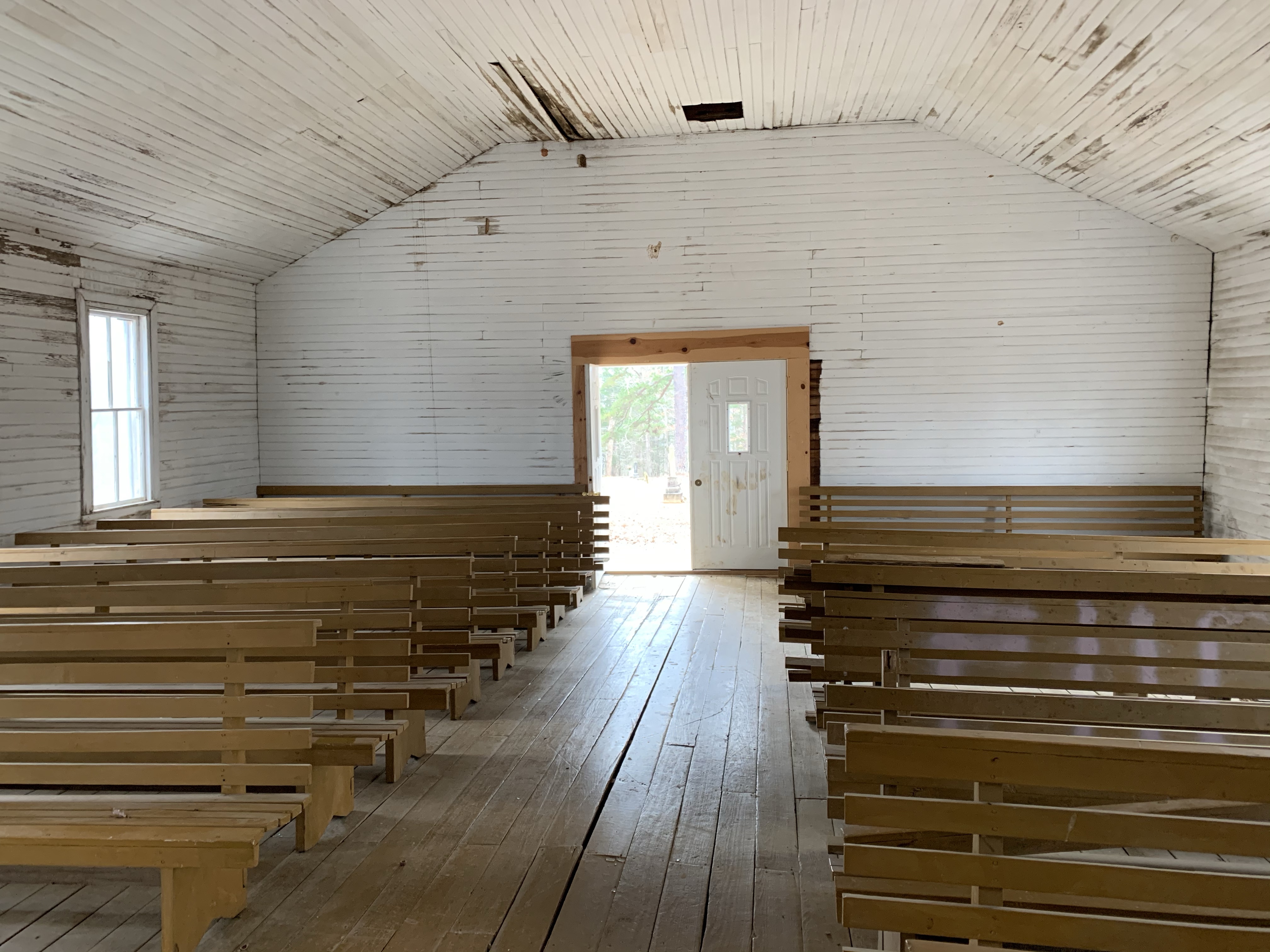 I visited the place after residents reported that a new round of vandalism destroyed some of the historic pews and broke out several windows. Scenes of such stupid destruction are always upsetting. 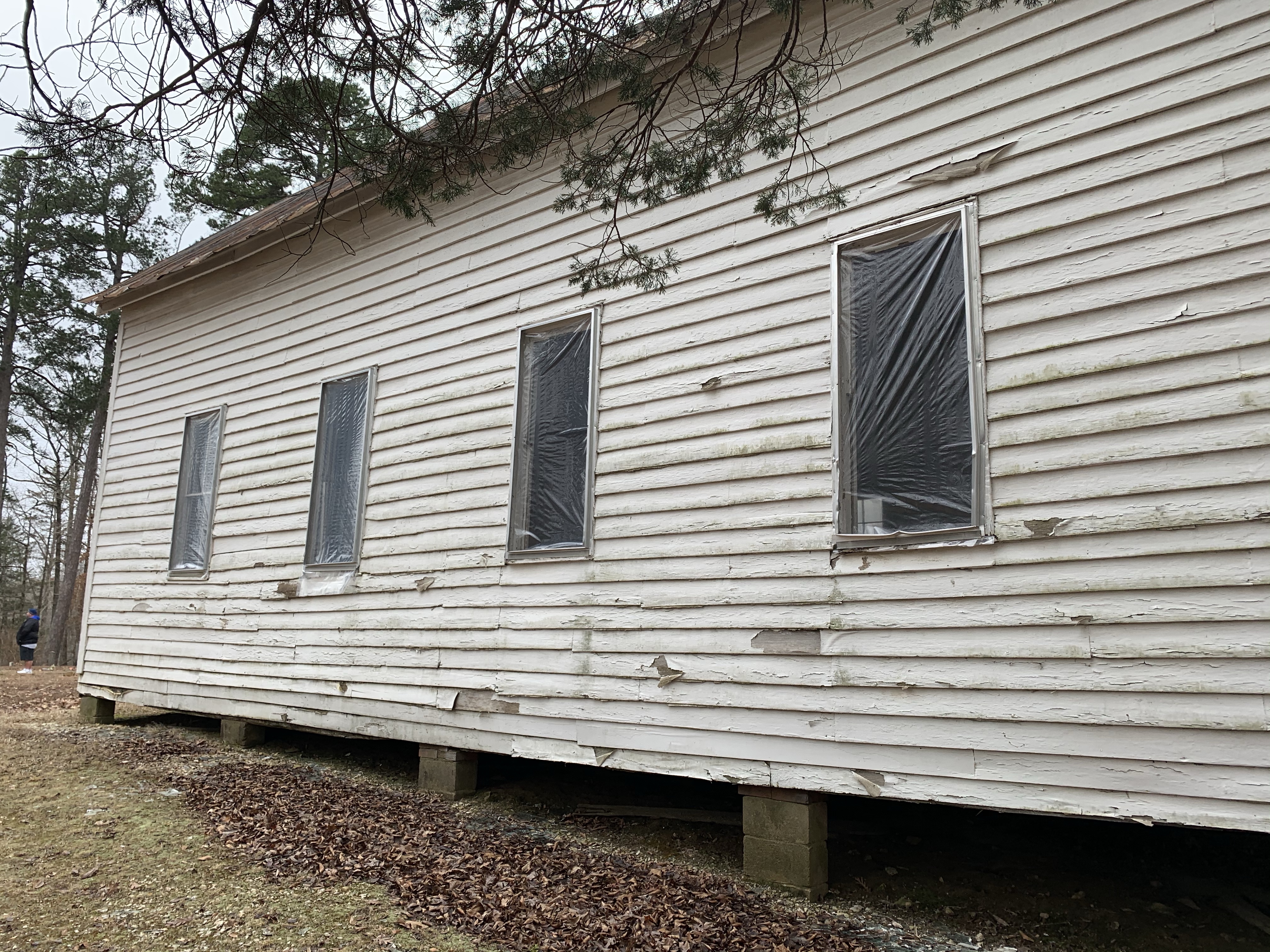 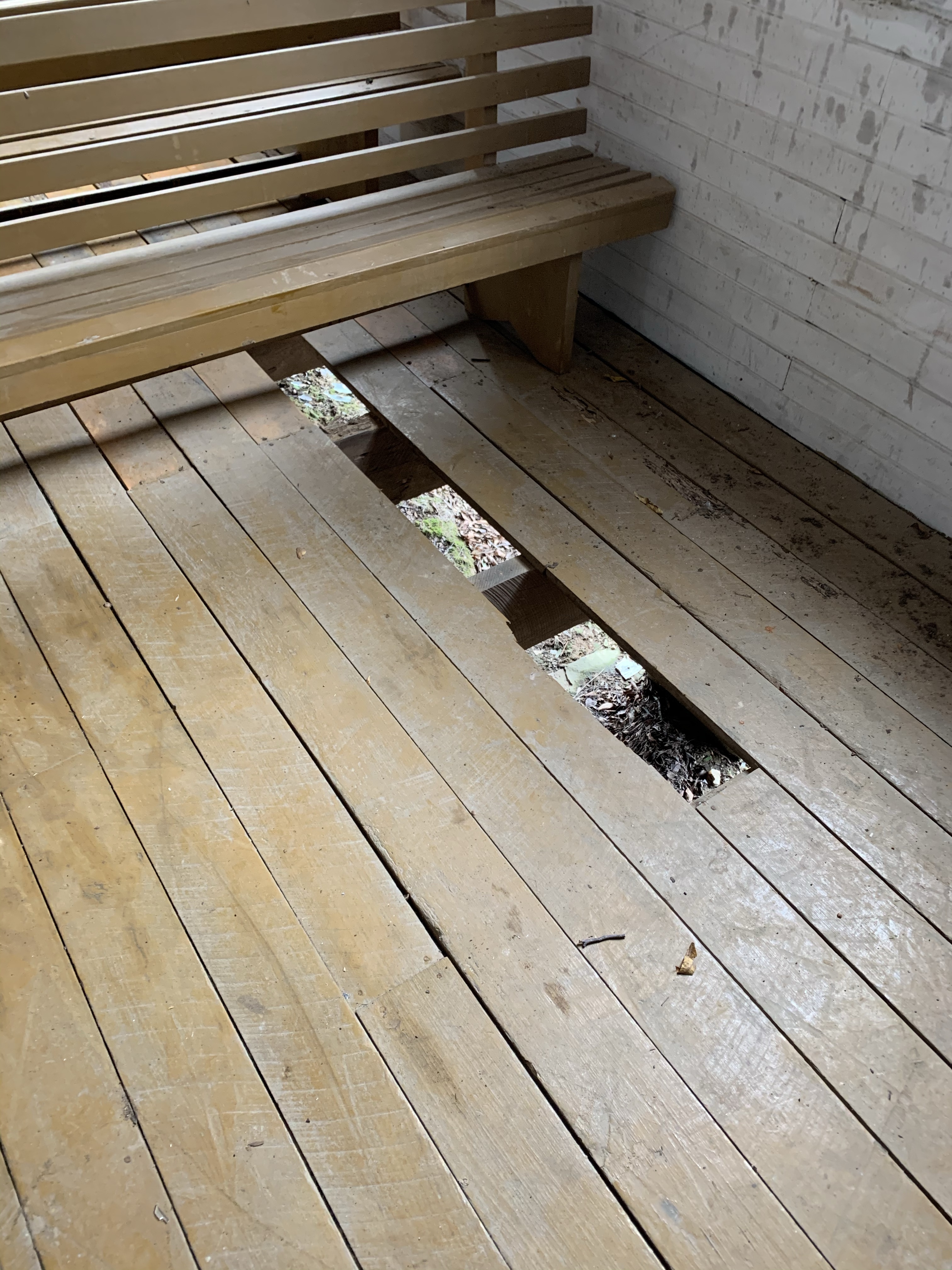 Residents have made quick repairs but they also felt that more historical recognition would help. The building is not abandoned (it is used at funerals) and once repaired it can host many other events. It is a splendid piece of Tennessee rural church architecture.

The cemetery has wonderful variation in grave markers, from ornate Victorian designs to ones best classified as folk art. More of this important historic site in Carroll County after we complete more research. 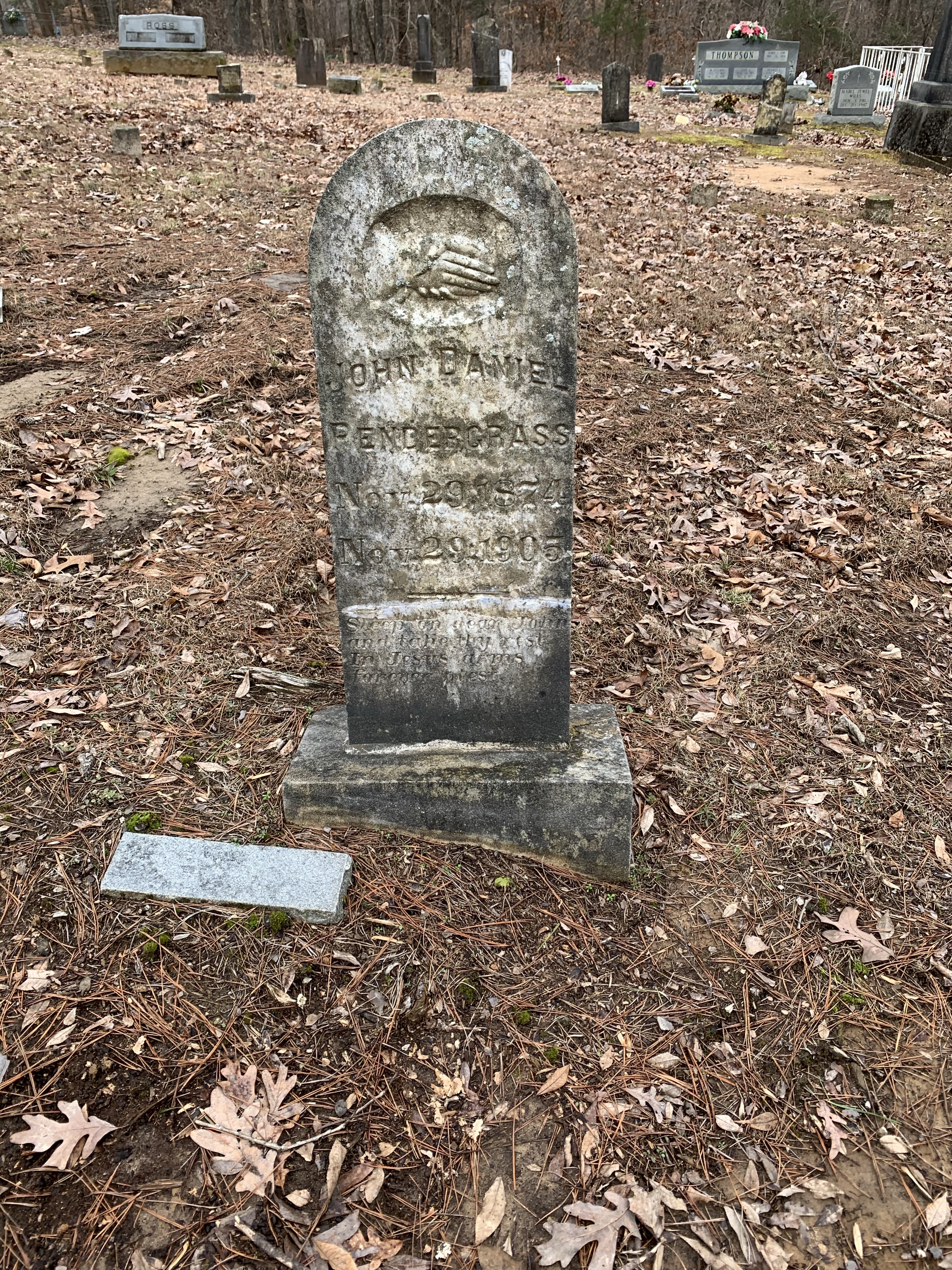 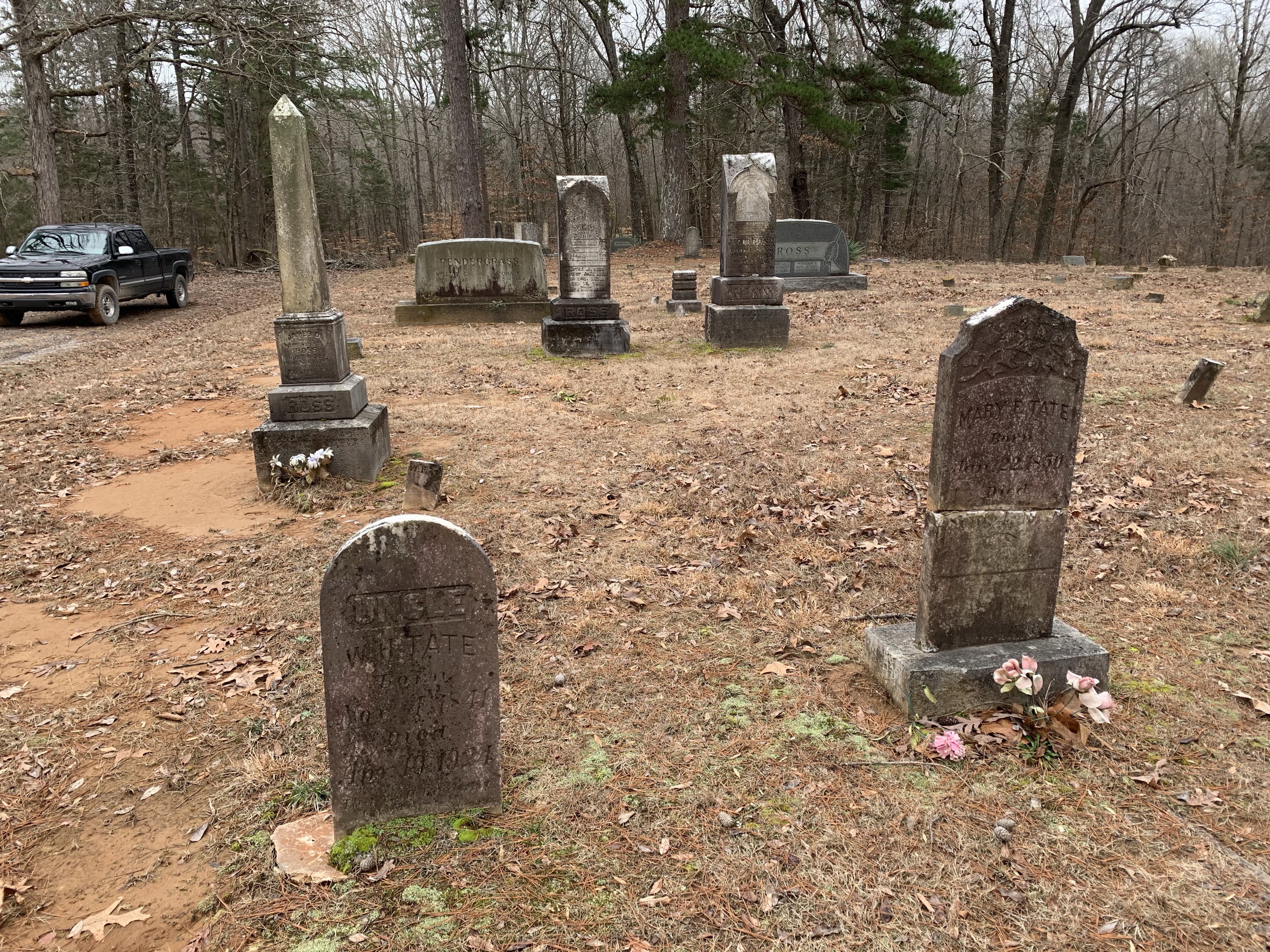 Too many African American cemeteries are abandoned and forgotten. For over 50 years the Pleasant Garden Cemetery in Chattanooga has suffered that fate.

Established in 1890 as the city’s segregated cemetery for African Americans, the cemetery remains a powerful statement of how Jim Crow laws marginalized African American community institutes much as possible. 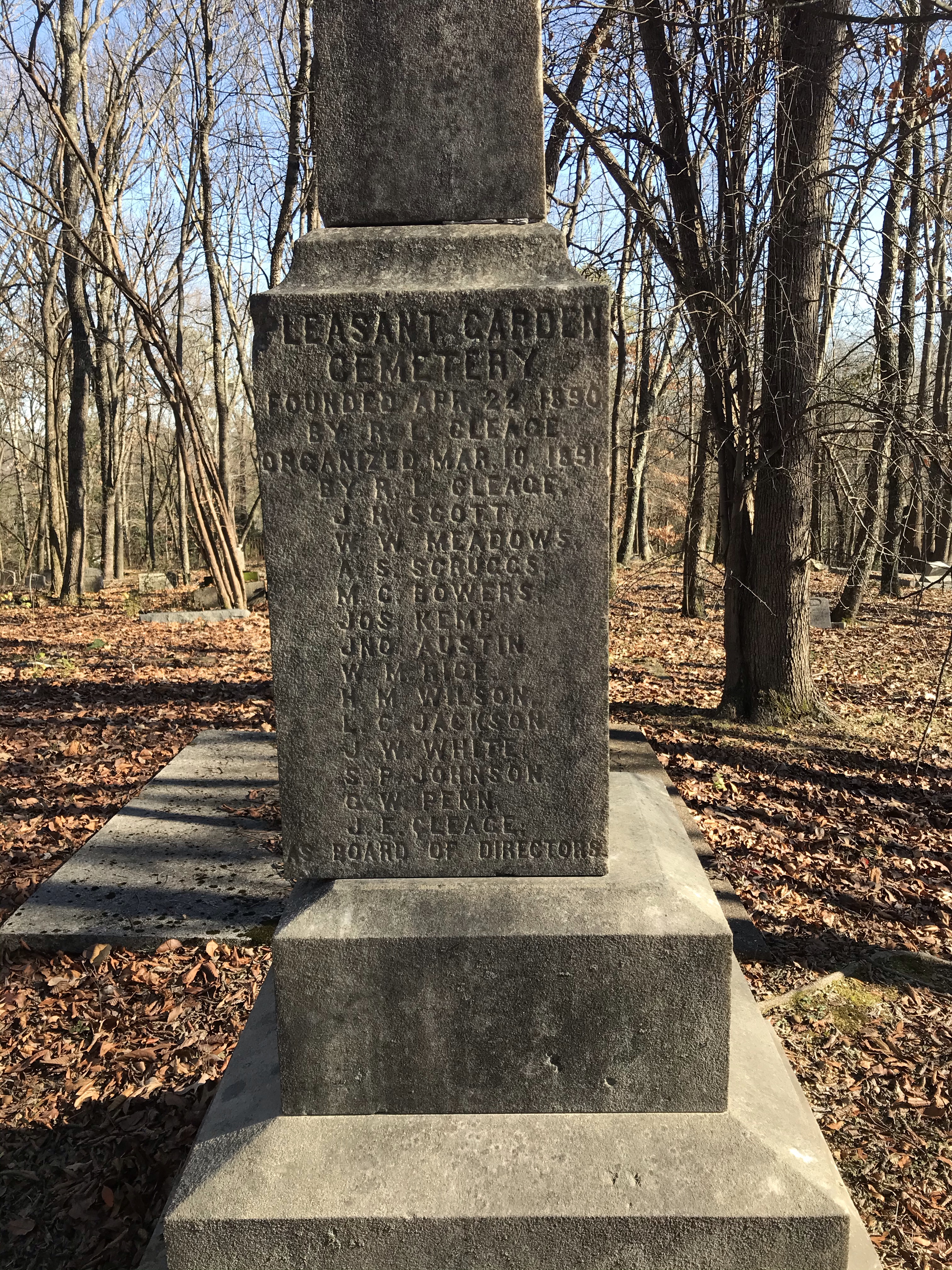 Yet the cemetery also shows African American pride and identity in important ways– the rural cemetery movement design of the place, the many evocative gravestones, and the many simply marked family plots. The time is now for this important place to be restored and its story told.

It is the least that should be done when here rests Ed Johnson, the victim of a 1906 lynching on the Walnut Street Bridge. 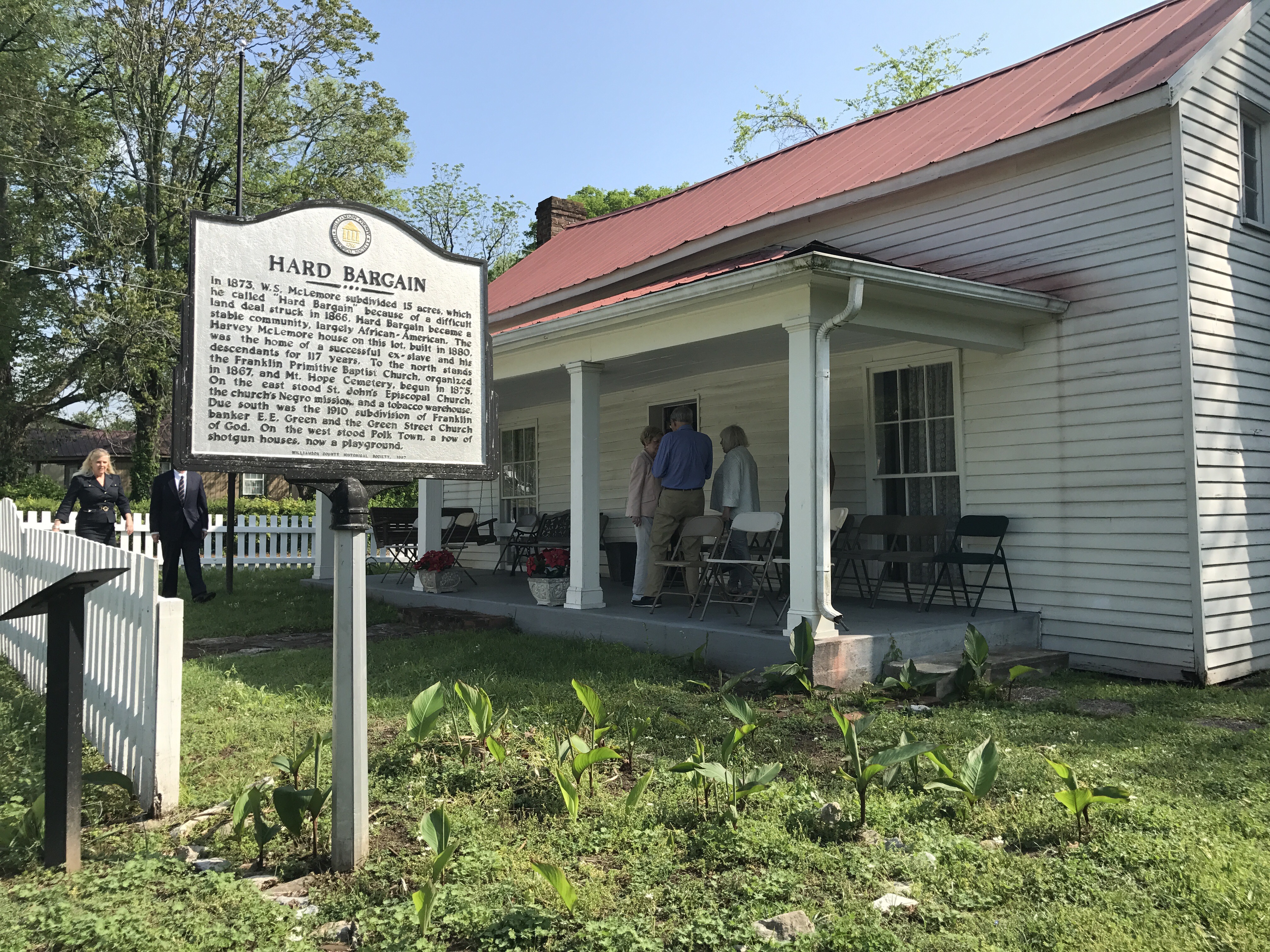 The McLemore House, dating c. 1880,  in the Historic African American neighborhood of Hard Bargain, tells how freed African Americans helped to build a new Franklin after the Civil War. 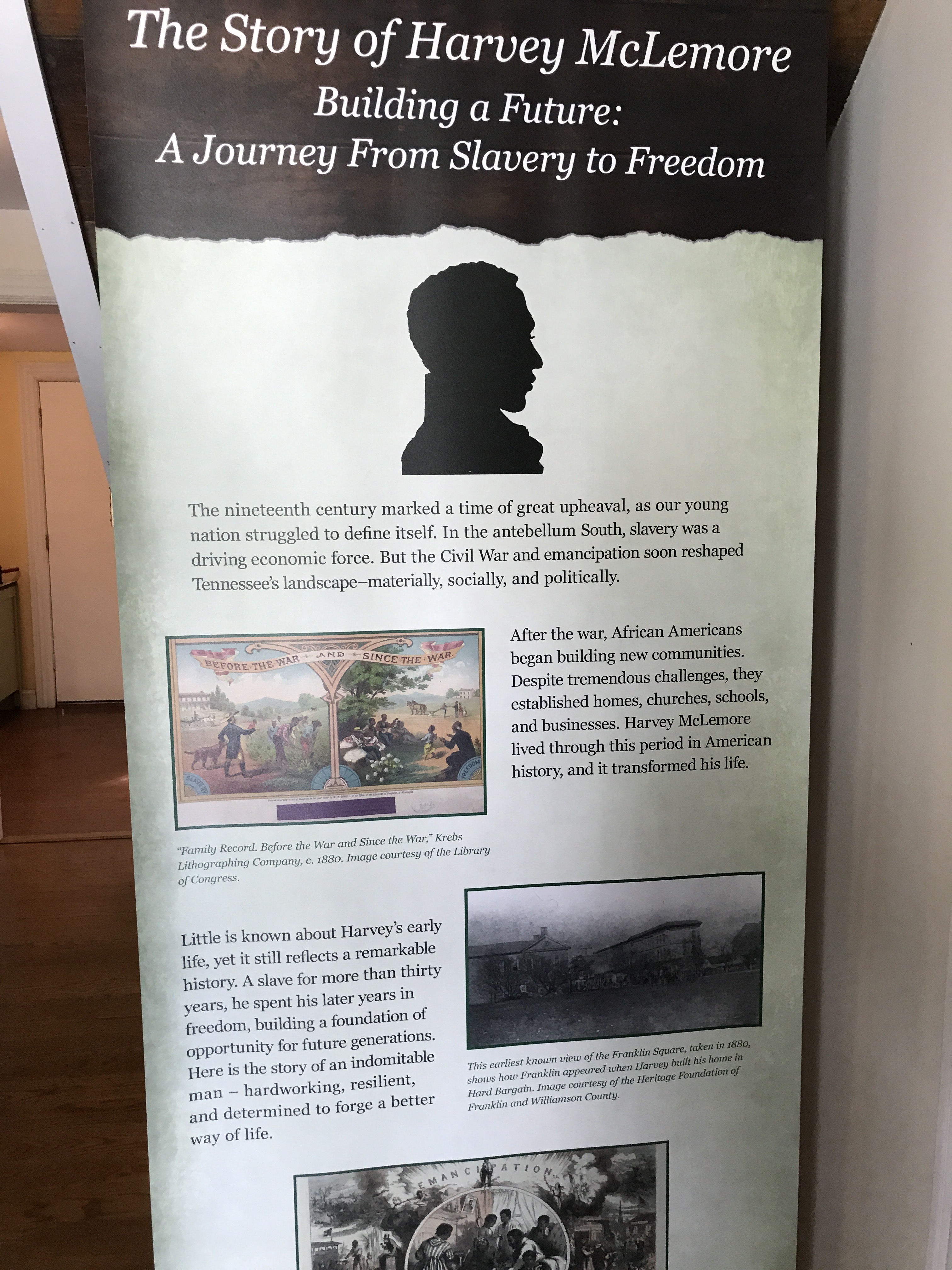 New exhibits prepared with the support of the Tennessee Civil War National Heritage Area tell Harvey’s amazing journey from slavery to freedom along with the impact his family had on Franklin for generations. 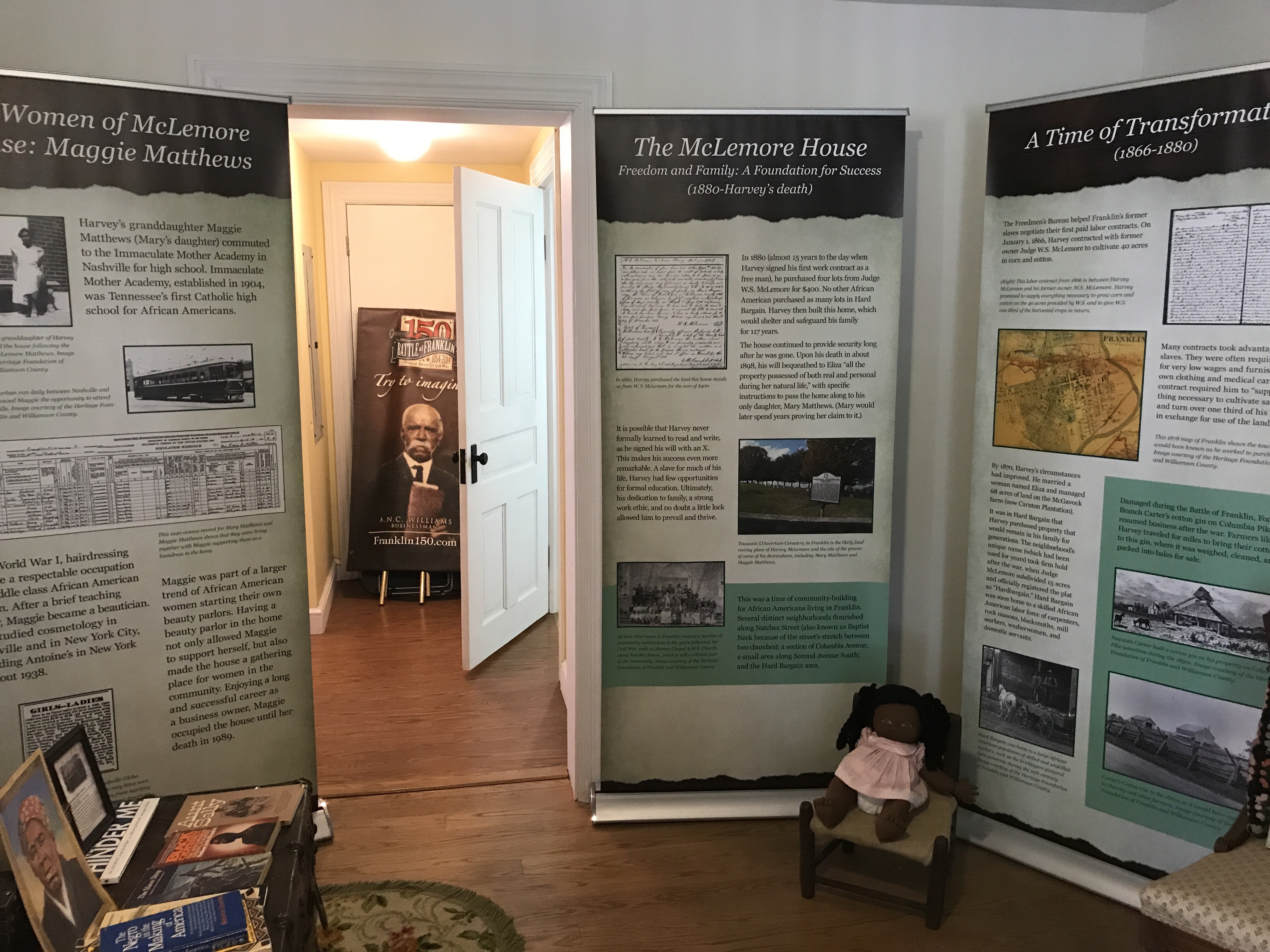 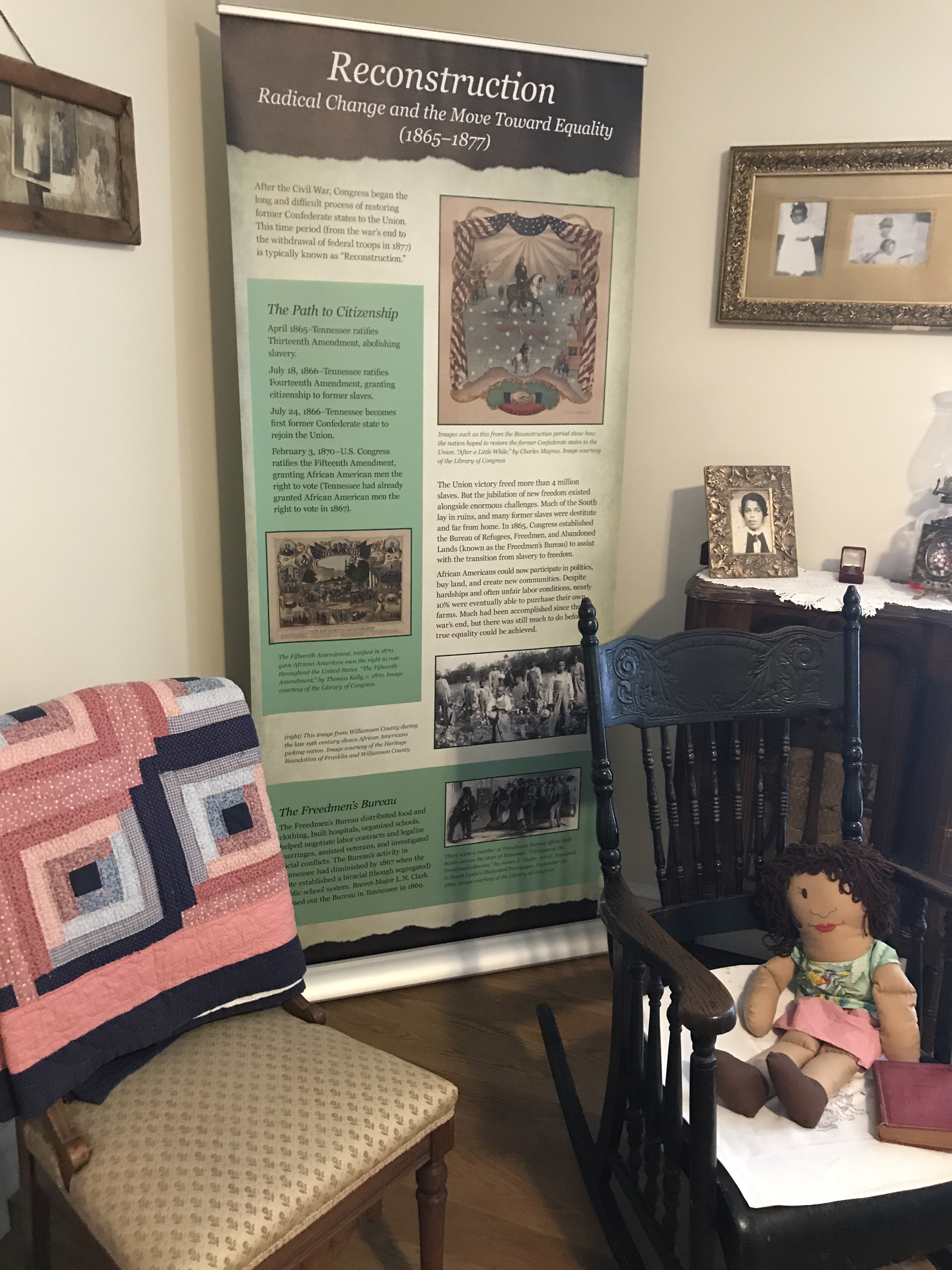 The McLemore House is a crucial addition to Franklin’s heritage tourism as it addresses people and stories too long ignored.

Dating to 1919 the Allen-White School in Whiteville was the first brick Rosenwald school in Tennessee plus local African Americans in Hardeman County raised the most money for the school than any other similar community in the state during the Rosenwald school building campaign.

In 2012 vandals burned the school just as its restoration was not underway. This act of hatred did not stop the community. Last week at the historic ElCanaan Baptist Church local leaders and members of the Tennessee General Assembly met to celebrate the beginning of a new campaign to restore the school as a community cultural center, thus restoring this rural community too. 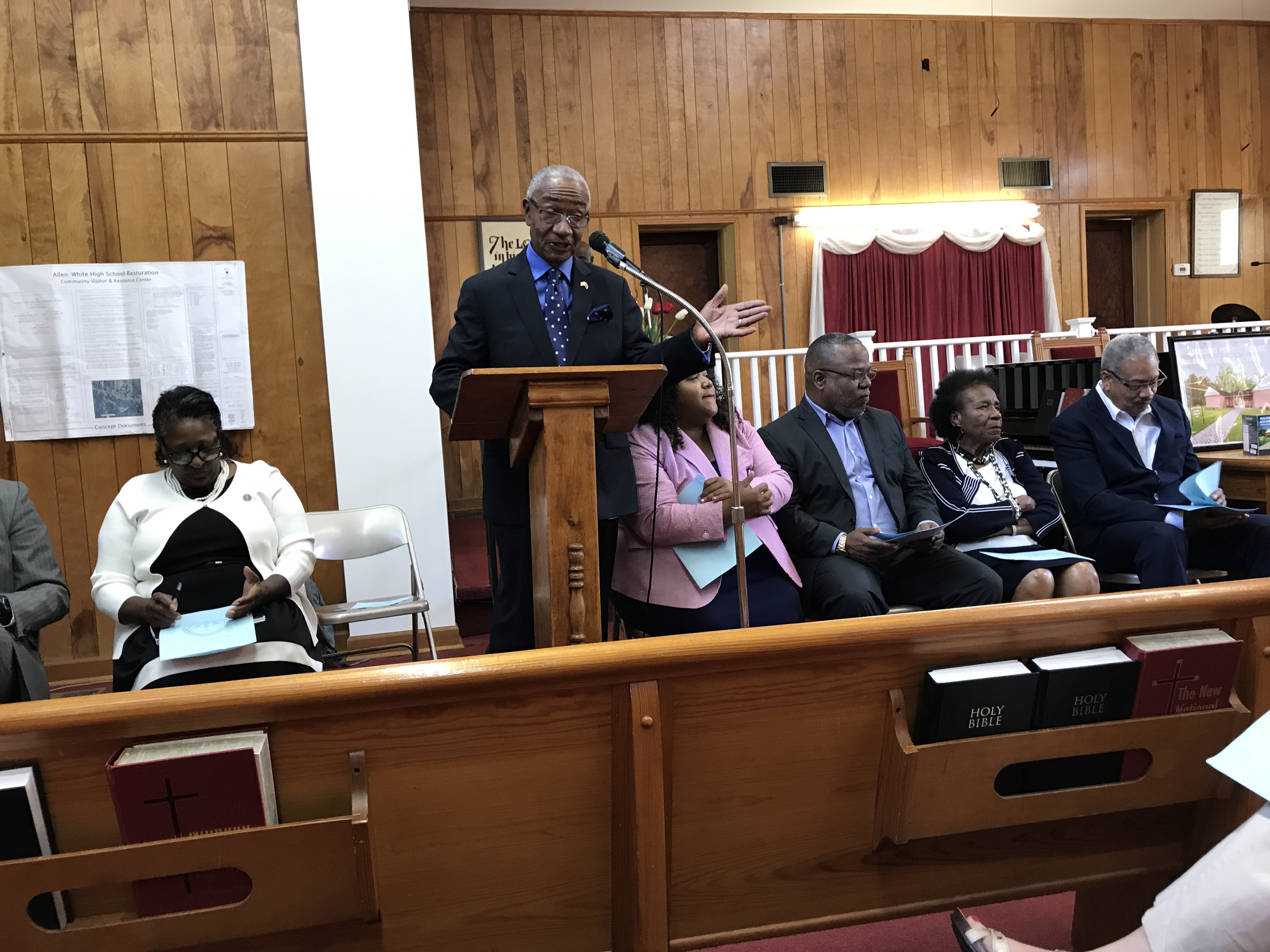 Last month I had the privilege of visiting one of Chattanooga’s historic African American neighborhoods, Lincoln Park. Nestled between the historic Norfolk and Western rail yards and Erlanger Hospital and the university of Tennessee, Chattanooga, the neighbors has a range of late 19th to mid-20th century homes. 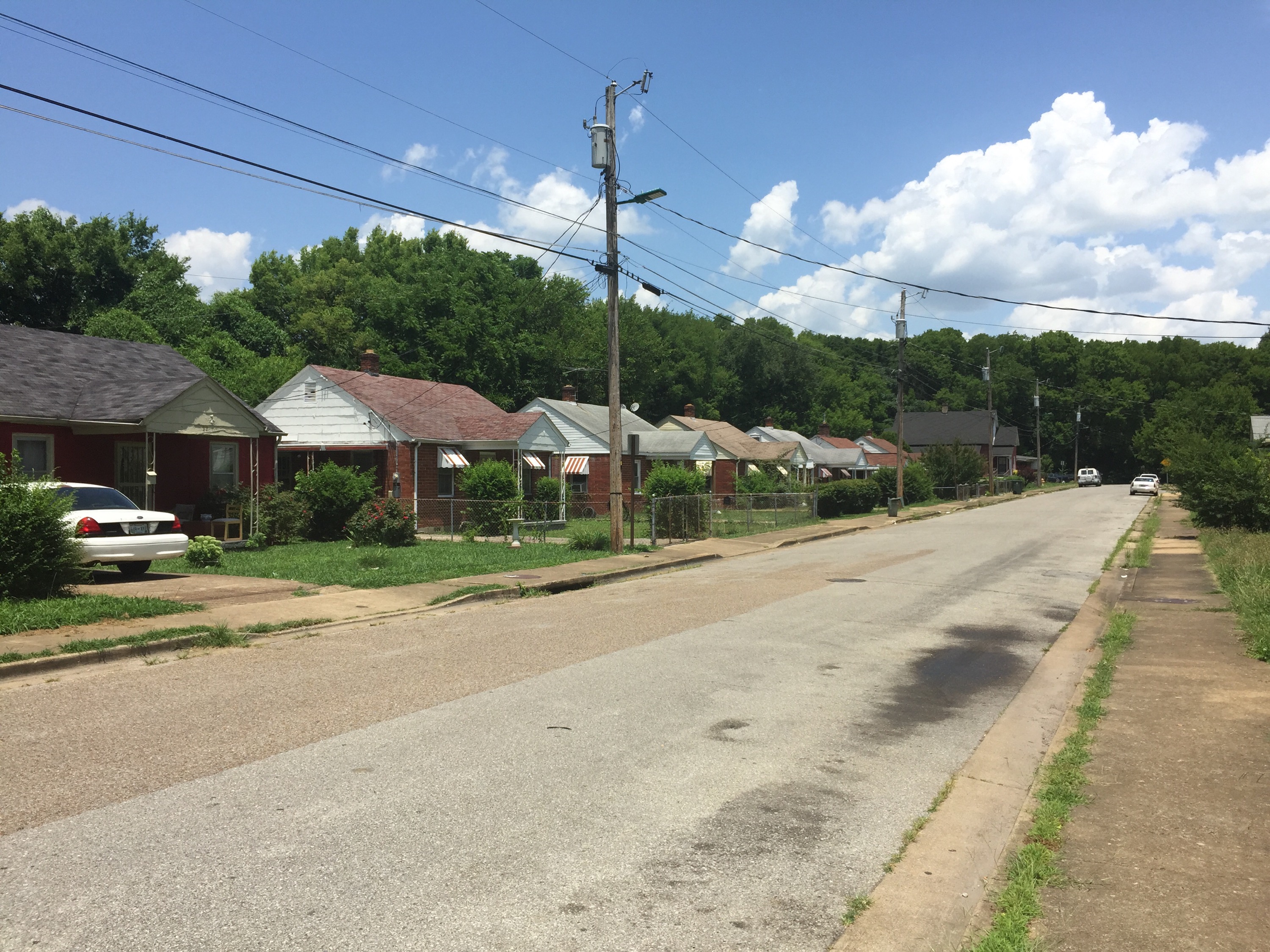 As we work with the neighborhood on its history, we will undoubtedly learn more about the homes and residents. 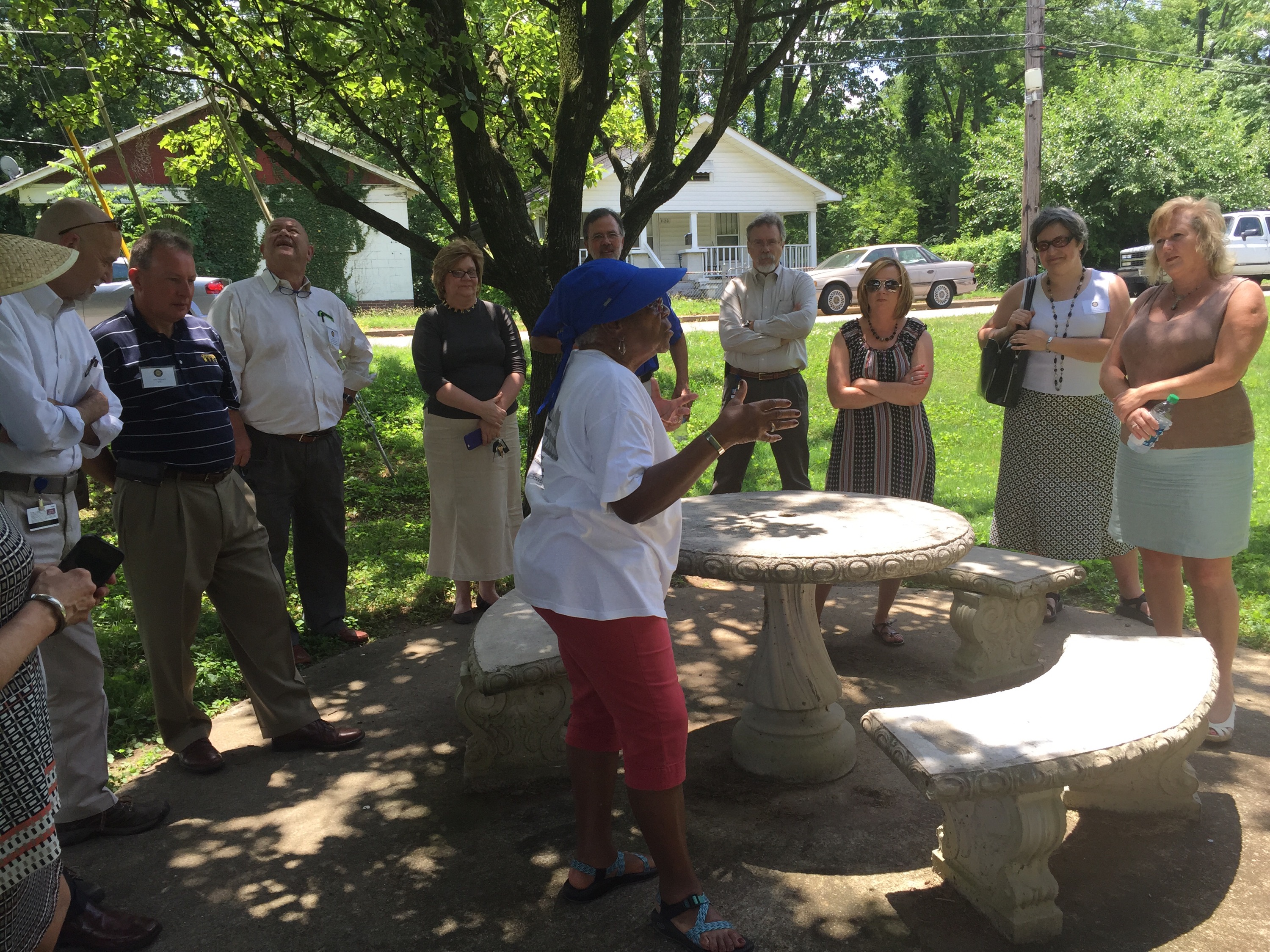 The centerpiece is Lincoln Park built as a segregated-black public park in 1918. Here is where Negro League games were played well into the mid-20th century. 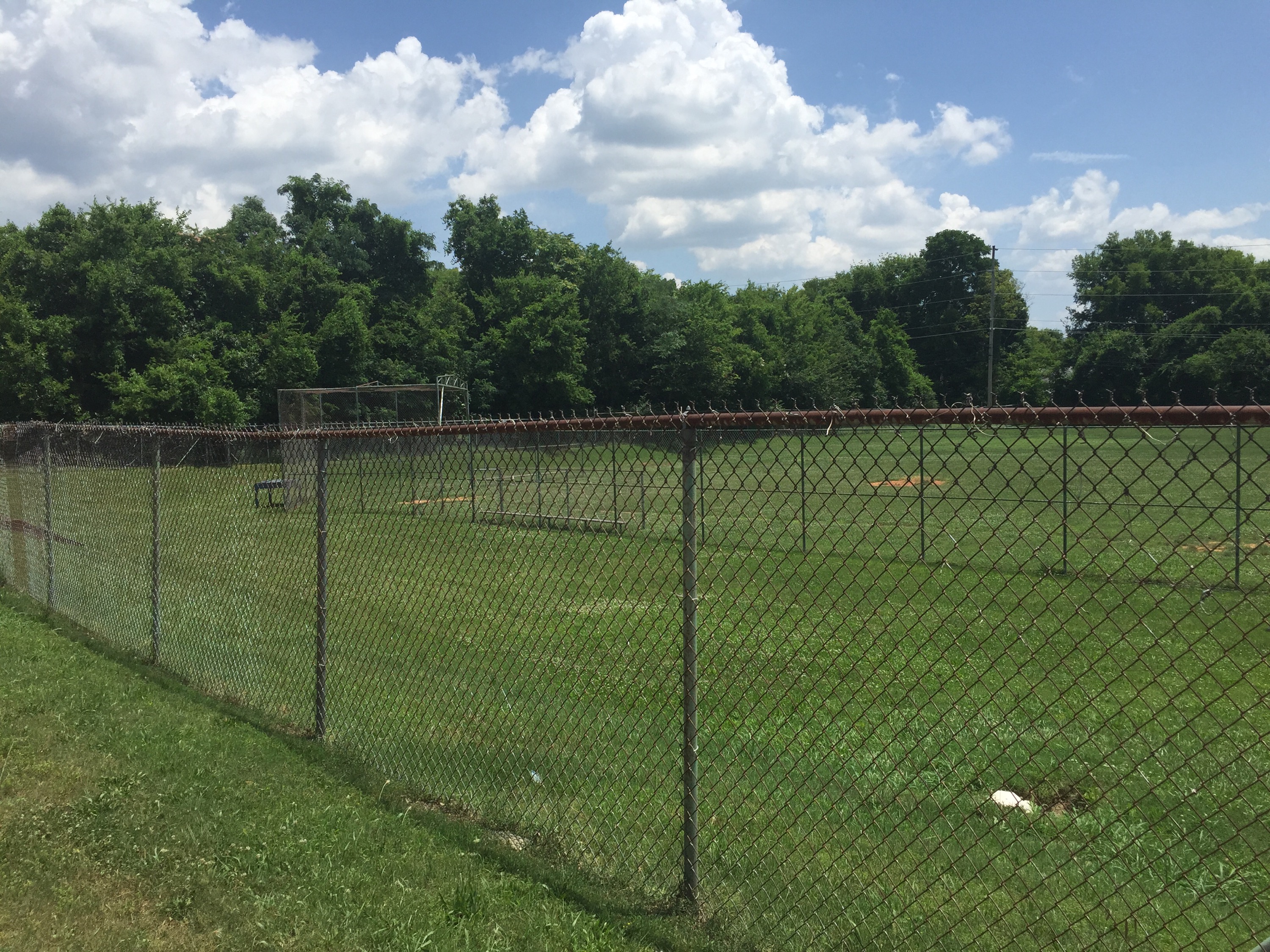 This place is important to Chattanooga’s history as well as the history of pro sports in Tennessee. I can’t wait to learn more.

Mountain City, the seat of Johnson County, is located in the northeast corner of Tennessee. Its history dates well into the nineteenth century but much of what you encounter there today dates from the 20th century, representing a blend of modernism, like the late 1950s Johnson County Courthouse above, and various revival styles, such as the Gothic Revival church below.

When I visited in June 2014 it had been years since visiting Mountain City. One welcome addition was a new community welcome center/history museum, which serves as a gateway to the county’s significant stories. 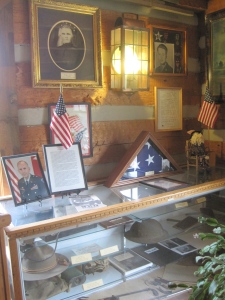 Another pleasant surprise was the continued survival of the National Youth Administration-constructed industrial shop at the old high school (which has since become an annex for government offices, an excellent adaptive reuse. 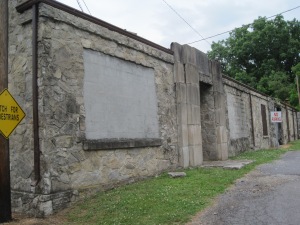 The mid-nineteenth century landmark R.R. Butler House remained in excellent condition as well–no better sign of the town’s pretensions and hopes for the post Civil War era in Tennessee history.

Tahlequah is the Capitol of the Cherokee Nation and it contains many tributes, such as monuments at the outstanding Cherokee Heritage Center and the town square about Chief John Ross, who lived in the Chattanooga area before Removal. 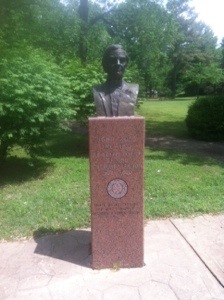 The Ross Cemetery, where the newly established John Ross Museum is also located, is a beautiful and somber spot. It is where John Ross is buried along with his brother Lewis, who lived at present-day Charleston TN before Removal.

This week my colleague Amy Kostine and I are working to finish the boots-on-the-ground survey of the Trail of Tears, focusing on routes in Arkansas, Missouri, and Oklahoma.  Once acknowledged as Indian Territory, Oklahoma today has a very interesting state historic site focused on Sequoyah–the Sequoyah Cabin, where he lived from the late 1820s through the 1830s, when thousands of Cherokees began to arrive in Indian Territory from the Trail of Tears in 1838 and 1839.

The small square cabin is encased in a very 1930s looking stone veneer memorial building, designed by Willard Stone and executed by the Works Progress Administration in 1936.  Indeed, the entire park is a WPA wonderland, with a stone wall lining the boundaries, a stone water tank, stone restrooms, and a log visitor center, which the WPA crew made from a second cabin that had been attached to the Sequoyah Cabin in the mid-nineteenth century. 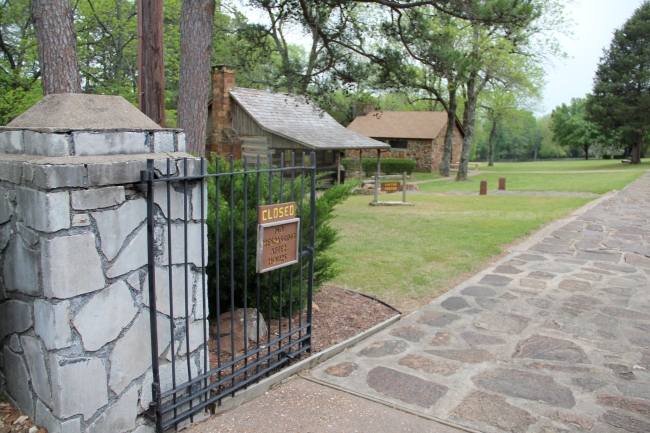 Another famous Tennessee Cherokee that I encountered today was at the grave of Talahina, the Cherokee wife of Sam Houston, at the Fort Gibson National Cemetery in Oklahoma.  She is buried in a circle of honor around the flagpoles in this historic and very moving cemetery. 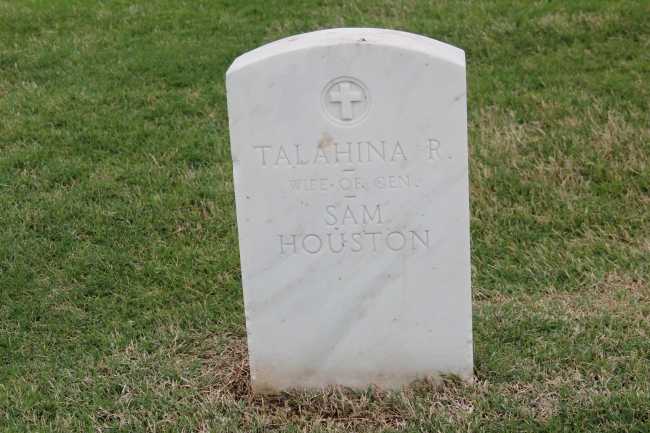